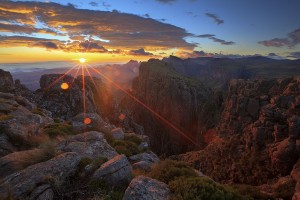 The 100 km long Ukhahlamba Drakensberg range sits between South Africa and Lesotho where it reaches a height of 3482m. Like the Semiens The Ukhahlambe Drakensberg Mountains were formed when massive eruptions deposited a thick basalt layer on top of older sandstone. The eruption is believed by geologists to have been the largest in the Earth’s history. The basalt layer has been eroded over time to leave extraordinary shapes for which the Zulu people named it ‘The Barrier of Spears’. The range has an abundance of life including the endangered Bearded Vulture and the biggest population of the world’s largest antelope the Eland.

Amongst the world’s most beautiful mountains, famous areas include the breathtaking Cathedral Peak Valley, the Mnweni, and The Royal Natal Park. The Ukhahlamba’s famous Amphitheatre Mountain is widely regarded as one of the most impressive cliff faces in the world. The cliff is roughly 1200m tall, and 5kms wide, making it roughly ten times the surface area of El Capitan’s famous Southern Western Face, six times that of the famous Eastern face of the Matterhorn, and almost three times that of the enormous North face of the Eiger. The Tugela Falls flows off this cliff face and is regarded as either the tallest or second tallest waterfall in the world depending on various historical measurements made on both waterfalls. 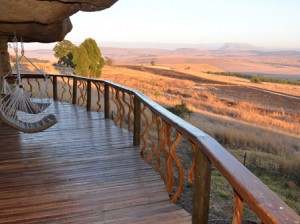 Stay in a luxury cave. Glass doors open onto a wooden deck with hammock chairs and a spectacular view. Antbear Lodge offers comfortable Drakensberg accommodation near to Giants Castle